Two weeks ago we had a surprise call from our friend who was scheduled to do work on our house. He had finished a job early and was ready to start, a whole month earlier than planned.

This was obviously great news. But, inevitably panic ensued. For the week before he started suddenly we had to:

Needless to say it was a pretty stressful week, but with much help from relatives – and lifts to B&Q and Ikea – we got there. Work started on Tuesday, and while we’re waiting for delivery of the kitchen, it was decided to start on the lounge first.

Here’s how it was looking as you know:

And, here’s this week’s progress, click one of the images to load the gallery: 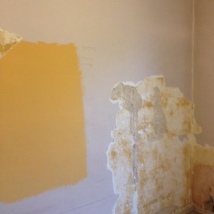 Early signs are not too bad

Hmm, maybe need to start moving things out of this room… 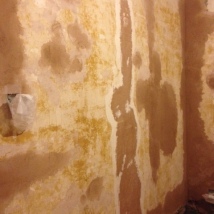 Skirting boards come off. Back to the old brick! 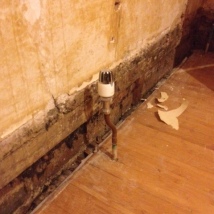 This is where we are currently. Lounge is out of action!

The lounge is totally out of action now, and with the kitchen about to be started, we have had to decamp upstairs.

It’s weird. It feels like we’re living in a cheap hotel room. It’s not normal (in my opinion) to have so many electronics in the bedroom. Though, there is the added bonus of watching Newsnight in bed. Oh the luxury.

Next week work on the kitchen begins. The upstairs is filling up with different pieces of furniture moved from different rooms downstairs, and I’m now about to dismantle the kitchen and pack away all the things only recently unpacked.

But, with the help of Ikea, B&Q and the excellent Kristian – we should be on the road to revamp shortly. 6 weeks till Christmas…when we are hosting 9 other people and ourselves.

It will be fine. Honest. I’m the picture of calm.

As you know, the building site continues. But as we have to live in it for a while, we have decided to try to make it as nice as possible. (As nice as it can be with holes in your walls and random patches of paint everywhere).

So, I have been unpacking more and more and rearranging rooms to make them as liveable as can be. The lounge is looking more lounge-like. This is what we had for a while.

The one comfy chair situation was not one that could last long when there are two of you living there. Try watching a three hour film on a deck chair and you will know what I mean.

This room doesn’t need much work really but the work isn’t going to happen for while. The plan is we need to re-plaster (it’s crumbling), then paint (we picked the colour ‘Orangery‘ already) and then hope to be able to restore the original dark wood floorboards that should be under this bamboo flooring. They look okay from the cellar, but who knows what we will find when they come up. Oh, and we also need to replace the skirting boards too. And this is a room I said didn’t need much work.

But, as there isn’t anything structural, it isn’t a priority yet. So, we need to make nice for now.

First step was thankfully being offered a sofa on loan, which has been gratefully received and much lounging has already occurred. We then moved an old shelving unit from upstairs (which we aimed to throw out, but now I’m pleased we never got round to it) and today I have filled it with just some of our books (we have way too many). And with some pictures unwrapped and balancing precariously on shelves and fireplaces, it’s just starting to look just a bit cosy:

That will do for a while.  We have a few weeks without workmen coming up, so I did an epic clean today so we can enjoy the dust-free weeks.

The dust-free weeks until we get our kitchen ripped out and redone, and then all the dust in the world will be upon us again.

But, for now, I have my feet up on the (borrowed) sofa and I’m not thinking about anything else but lounging.